The most feminist men I know have never announced to me that they’re feminists. I was able to discern their feminism from their actions.

As the latest revelations of the extent to which GamerGate-related harassment and intimidation of women online were coordinated at the highest levels of right wing and even mainstream media organizations reverberate throughout social media, many men who like to think of themselves as allies, and who are not themselves overflowing with misogyny, are left to wonder how they can be useful to their female friends who find themselves the subject of harassment that has become all too ubiquitous. Below are some useful tips and reminders for male allies.

If a woman in your life who you know and respect tells you that she is being harassed, believe her. Many men, intentionally or not, have developed habits to question everything, which in many contexts are rewarded. However, in the context of supporting a friend or loved one who is experiencing misogynistic harassment, intensive questioning or interrogation can be perceived by the victim as questioning their lived experience, or gaslighting behavior.

2. Remember That Women Are Better At Detecting Misogyny Than Men.

While you’re listening to the victim’s experience, some men may wonder whether the harassers’ motivations are truly rooted in misogyny. However; it is important to remember that we, as men, don’t have to deal with the subtle ways our culture reinforces misogyny on consistent basis. As a general rule, men should trust that, no matter how enlightened we think we may be, our male privilege erects blinders to our ability to perceive the subtle and even not-so-subtle ways misogyny presents itself.

Thus, when a woman says that she is the target of misogynistic abuse or harassment, more often than not, questioning whether misogyny is actually present is gaslighting.

3. Avoid Engaging in Misogynistic Abuse Online (And In Person, For That Matter).

If you consider yourself an ally to feminists, the easiest way to ruin your credibility as an ally is to engage in misogynistic abuse against a woman you disagree with. That is not to say that you should not voice disagreement with people just because they are women. However; using gendered slurs or other forms of misogynistic abuse (such as slut shaming, body shaming or objectifying, etc.) against a woman, even a woman who holds objectively abhorrent views, is not something committed allies should do.

In fact, it might be a good idea to review your social media accounts for any use of gendered slurs and reflect on why you decided to use such problematic rhetoric. It is all too common for men, particularly when we get emotional or agitated, to blurt out a nasty insult to get our rhetorical opponents to back off. Gendered slurs, slut shaming, body shaming and other forms of misogynistic abuse are ubiquitous because many of us have not seriously grappled with exactly why these rhetorical devices are at the top of our consciousness when speaking with women we disagree with or who have irked us in some way.

Consider that when you call a conservative woman you are arguing with about the merits of Cheeto’s Muslim ban a “b*tch,” you are providing cover for the next Bernie Bro or MAGA troll to use that same slur to your friend or loved one.

If you’ve done this in the past, own up to it. No ally is perfect. We all have done and said things that we wished we hadn’t (like, for example, that time I referred to Susan Sarandon as a “b*tch,” which I apologized for in Season 2, Episode 4: Mistakes Made). Being defensive or explaining why what you said was different is not going to come across well. Speaking from experience, the best way to deal with being confronted with a past transgression is to accept responsibility, reflect on why you did it, and pledge to be more careful with your words and actions int he future.

4. Call Out Misogyny And Harassment When You See It.

There is a remarkable disparity between how men and women view online harassment. According to a recent Pew poll, seven-in-ten women (70%) say they see online harassment as a major problem, compared with 54% of men. If online harassment is going to be taken seriously, we need to work on closing that gap.

In my opinion, a big reason for the gap is that some men just don’t see harassment of women for what it is, so we have to show them.

5. If You Choose To Get Involved, Do So With A Purpose.

If you do choose to white knight, this article is a good resource for tips and strategies.

Clearly there’s no one “right” way to intervene, but I’ve already heard several suggestions. Men, we can’t remain silent any longer. Let us:

1. Listen to women’s experience of online abuse and threats by men. Let us read articles about it – the ones linked here are a good place to start. Instead of suggesting solutions, we can take in how hurtful the comments are.

2. Reach out to the target of the abuse. Ask her what she’d like to you do, if anything.

3. Write, “I think you’re right,” in Comments sections of articles, Facebook postings etc. of feminist women.  Whether or not they’ve been harassed or attacked, agree with them and do so publicly.

4. When men harass women online, speak up. We can say something like, “As a man, your harassing comment offends me,” in the Comments sections.  Say how it hurts you rather than speaking on behalf of the target.

5. Name the specific silencing tactic being used: name-calling, focusing on a woman’s appearance instead of her argument, etc.

6. Use humor. We can post something like, “Dude, put down your club–your caveman is showing!” Search online for feminist comedians of all genders who have done entire routines on this.

7. Watch for “professional trolls” from the “Men’s Rights” or “Father’s Rights” groups. They will often use terms such as “misandry” and refer to the feminist movement as anti-male or the domestic violence movement as an “industry.”

8. Send supportive emails, letters, candygrams, etc. to feminist women. Thank them for the good work they are doing–not just when they are targets of online harassment, but all the time. “If you see someone doing good work, you can be sure they’re being told they’re fat and ugly,” says Emily May. “Nice emails counterbalance the noise.”

10.  If the perpetrator isn’t an individual but a company, boycott the company. Write negative reviews of it on “Yelp” or other review sites, or  suggest policy or legislative changes.  (See the Ecological Model for Social Change for the philosophy behind this.) 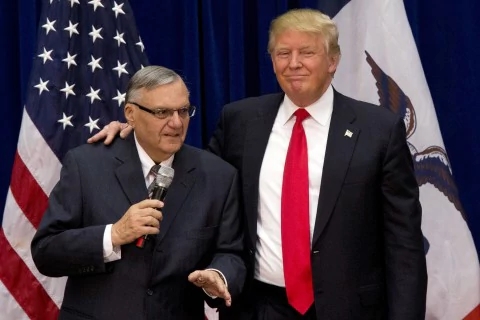 As you may have heard, Trump issued his first pardon of his presidency to former Maricopa County, Arizona Sheriff Joe Arpaio. Arpaio was recently convicted in a case involving contempt of a federal court’s order. What does this mean? Why did he do it? Is it legal? Allow me to lawsplain.

What is the presidential pardon power?

The presidential pardon power is granted by Article II, Section 2, Clause 1 of the Constitution, which says:

The President…shall have Power to grant Reprieves and Pardons for Offences against the United States, except in Cases of Impeachment.

Thus, the presidential pardon power extends only to federal criminal acts, and does not and cannot be used to absolve a person of civil liability or immunize them from prosecution under state law.

But does a criminal contempt conviction qualify as an “offense against the United States?”

It turns out that it’s not entirely clear that a criminal contempt conviction actually qualifies as an “offense against the United States” in this context, since in Arpaio’s case the Government agreed to limit his potential imprisonment if convicted to six months or less, which obviated the need for a jury trial.

However, the U.S. Supreme Court in Ex Parte Grossman, 267 US 27 (1925) ruled that a conviction for criminal contempt of court and sentence of 1 year did qualify as an “offense against the United States,” and upheld President Coolidge’s pardon of a man who was criminally convicted for contempt of a federal court order prohibiting him from selling alcoholic beverages during the prohibition era.

Whether Ex Parte Grossman would have the same effect in the context of Joe Arpaio remains to be seen.

What does the pardon mean?

If it’s upheld by the courts, it means that Arpaio will not see the inside of a prison cell as a result of his conviction. However, the pardon will not absolve him of civil liability, and I would suspect that one or more victims of his contumacious conduct (that is: the brown people he illegally stopped in violation of the court’s injunction) will sue the pants off of him. At least I hope they do.

There is also the little problem that, according to SCOTUS, once Arpaio accepts the pardon, it is likely tantamount to an admission of guilt (although whether a court will construe it as such will depend on the exact wording of the pardon, which hasn’t been publicly released yet). Thus, Arpaio and his lawyers are likely now wrestling with whether to accept the pardon and how to deal with the legal consequences that will result.

Finally, let’s not diminish the fact that this pardon will have tremendous implications for the Arizona GOP in the 2018 elections and possibly beyond.

Join Elizabeth, Kara, and Kevin as they break down the news of the day with honesty and rage.