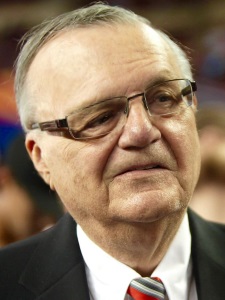 As the second season of Humorless Rants, Elizabeth and Kevin bring you a lively discussion of the week’s events.

They start with a discussion of the DNC lawsuit that recently ended after a year in court. Federal Judge William Zloch dismissed the complaint by Jared and Elizabeth Beck claiming that the DNC had plotted to make Hillary Clinton its presidential nominee. Humorless Rants has been covering this issue since it began. So our intrepid duo have a few thoughts on whether the DNC was really in “cahoots” with the Clinton campaign, and whether Florida judges in red robes should only cry in their chambers.

Next up, the Ranters take on the pardon of Joe Arpaio. Elizabeth has a long history with the racist, power-abusing sheriff and she gives him a good introduction to his many misdeeds that led to his conviction. But even with the pardon, it isn’t all bad news. Sheriff Paul Penzone, who succeeded Arpaio is cleaning up Arpaio’s mess, including shutting down Tent City.

Both Elizabeth and Kevin also discuss the status of the pardon. You might be surprised to hear that it is not a done deal. But you will have to tune in to find out about it.

Although it is on hold for up to a year during which the military will study the issue, Trump is pushing forward with his ban on transgender troops. Elizabeth and Kevin get into the broader issues with regard to this. Many would like to see the military refuse this order at the same time that they realize how dangerous that would be for civilian control of the military. Tune in to hear the discussion.

Be sure to tune in next week for a review of the week’s news. We’ll update this when we know what the Ranters will be talking about.

Image cropped and distorted from Sheriff Joe Arpaio at a rally for Donald Trump by Gage Skidmore. Licensed under CC BY-SA 2.0.

Publisher of Frankly Curious and freelance writer and editor everywhere. View all posts by Frank Moraes

Join Elizabeth, Kara, and Kevin as they break down the news of the day with honesty and rage.